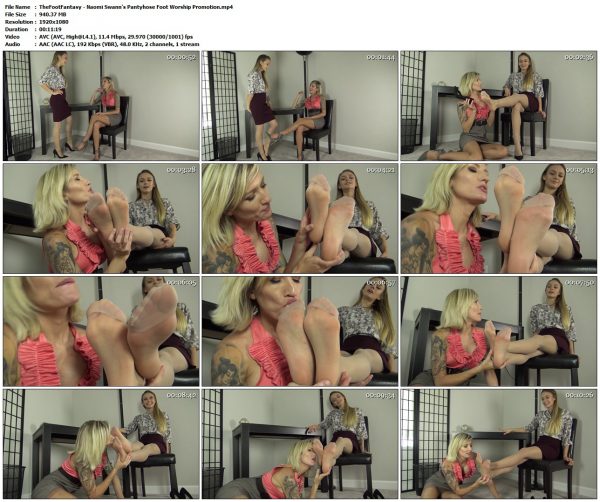 Reagan Lush is in her office in her hose and heels in business attire when her secretary Naomi walks in. Naomi is ready for a promotion and a raise, telling Reagan she thinks she can handle more responsibility. Regan tells Naomi there is a position open but she isn't the one to make the final decision, but she could have a lot of sway over what her bosses say. Naomi is really interested now as Reagan sits her down and tells her she can be convinced to throw Naomi's name out for the promotion. There is something Reagan has been wanting too, it's Naomi's soft Nylon Legs and especially her hosed feet straight from her high heels. Naomi is a little confused but goes along with Reagan as Reagan takes off her shoes and starts to kiss Naomi's nylon encased feet. Reagan goes from kissing to licking and sucking, soaking Naomi's pantyhose with her mouth. Naomi's hose are soaking wet from the sexy nylon foot worship but she will go with whatever Reagan wants to get this promotion.