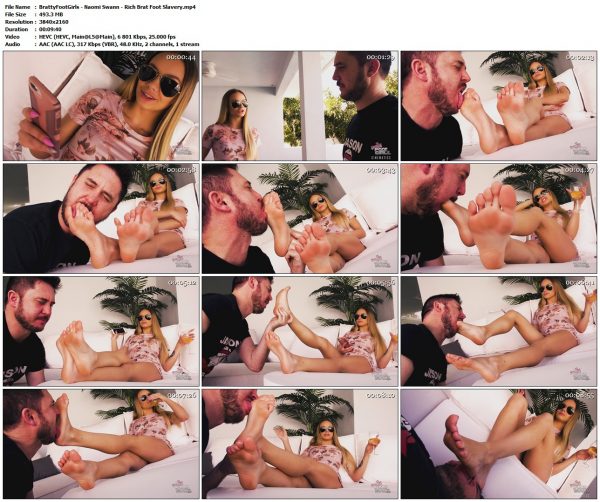 In our first one – Rich Brat Naomi is lounging by the pool sippng her drink and texting her girlfriends while the pool boy finishes cleaning the pool.he thinks he's finished and goes to check out for the day, but the mean brat isn't happy with the job he's done and ells him he missed a spot. he gives her attitude and tells her that her dad is the only one who can order him around. She doesn't take to his atittude kindly and tells him she will have him fired if he doesn't do as she asks. He goes to clean the pool but it's too late now. She tells him something else needs to be cleaned – her sweaty feet which have been couped up in her heels all day in the sun! "Get fucking down on your knees and clean my FEET!" She screams at him. He quickly goes to task, licking her sweaty stinky feet as she looks on with a sneer on her face. Thisbrat is not messing around and verbally destroys him as he licks her soles and toes. "LICK between my toes now!" she orders as she quickly starts lapping away all the toejam built up between them. She cruelly starts foot fucking his mouth almost making him gag everywhere. She tells him this will be his new job from now on as she orders him onto the ground to be her foot rest. This is his new life now!