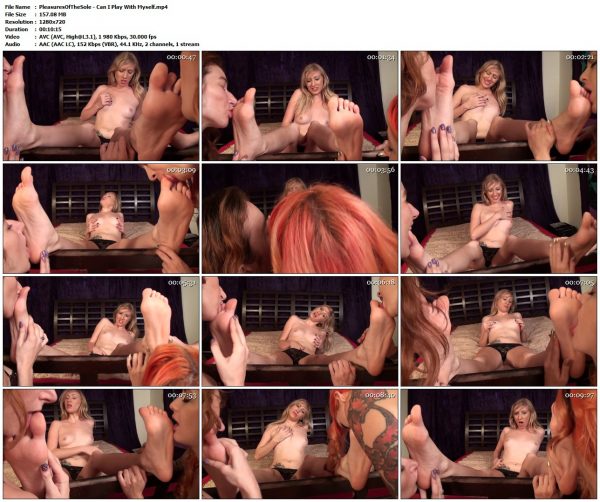 Laci Lynn is a hot 20 year old blonde with a smoking body, big tits, and to–for size 10 feet. Storm and Bianca are flirting with a TOPLESS Laci on the bed, complimenting her on her sexy soles, and it's not long before her toes wind up in their eager mouths.

Laci's feet are extremely sensitive. She gasps and moans with arousal almost as soon as the girls' lips touch her toes. STORM AND BIANCA FIND THE MOST SENSITIVE SPOTS ON LACI'S SOLES AND CONCENTRATE ON THEM WHILE THE TOPLESS BLOND TOSSES HER HEAD BACK IN ECSTASY AND CLUTCHES AT HER BARE BREASTS! She bites her lip and sighs with pleasure as the girls suck on her toes and nibble on her arches.

The foot worship is turning her on, and a few minutes into the session, Laci can no longer contain herself. SHE ASKS THE GIRLS IF THEY DON'T MIND IF SHE PLAYS WITH HERSELF, AND OF COURSE THE GIRLS DON'T MIND, SO LACI SLIPS A HAND DOWN HER PANTIES AND WORKS HER CLIT! Her moans get louder and louder as the girls really get into worshipping her feet, devouring her toes and sucking on her soles, covering every inch of her feet in saliva. Laci rubs herself harder while she watches the girls go down on her feet. Storm and Bianca get so horny they share a few passionate kisses, swapping Laci's foot taste while she moans and plays with herself in the background. When they go back to worshipping her feet, they are as aggressive as ever, and Laci's moans reach a crescendo a couple times throughout the session.

Laci's feet are also VERY TICKLISH and the girls can't help but tease Laci's soles with their teeth and nails, making her giggle and burst into laughter a couple times during the session. The girls enjoy teasing and tickling Laci's feet, but Laci's moans of pleasure are addictive, and they concentrate on worshipping her feet until the sexy blond is satisfied.