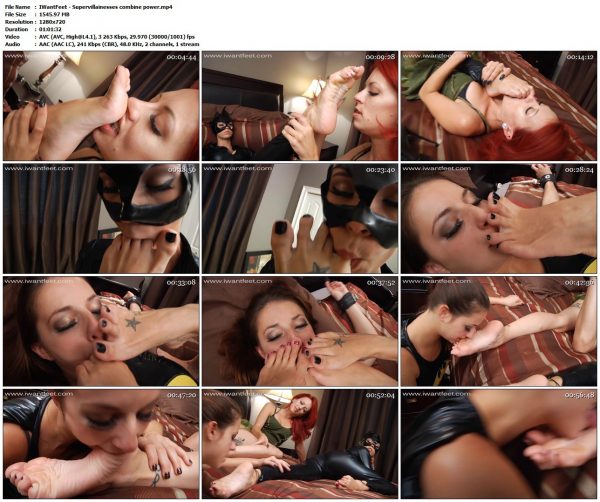 This is an incredibly HOT superheroine/villianess scene!!! In order to team up and pull off their plan to take control of all the superheroines they first need to combine their powers. This is not just a great plan it's super sexy. The extended licking and sucking of one another's feet allows the transfer of one woman's power to the other while keeping their own power fully intact. These sexy ladies really get after it totally devouring each other's feet with long slow sexy licks and passionate deep toe sucking and sole eating. The girls also seem to find that they enjoy sexy feet so it's a bonus for them………and us LOL! Now to get to work. They recapture Batchick and tie her up. When she awakens she's smothered by both villianesses feet forced to smell them deeply as their combined scents invade her brain making her into their slave. The girls also begin to lick their control into Batchick's bare soles to really invade her mind and make her into their obedient subordinate. To prove it the girls force Batchick to worship both of their feet with wreckless abandon which Batchick is only too happy to do. Fully converted to the evil side and willing to do their bidding the girls decide to test her conviction by forcing her to worship feet while one tries to distract Batchick with her biggest weakness by tickling her feet. Each evil villianess takes a turn to make sure that she can stay committed even under torture. In the end an evil and powerful bond is formed and Batchick is helplessly under their control. It's now time to get out there and begin to capture and torment the other superheroines in the city. The evil plan of Catwoman and Poison Ivy has been set into motion!