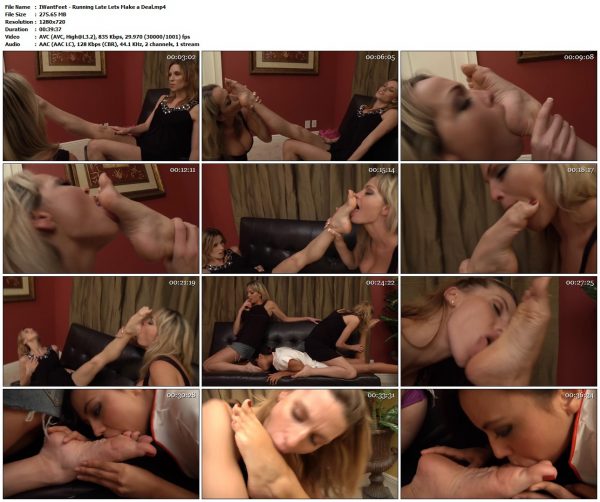 Wow!! Enough said. Mia is disasterously late. She has to fit her doctor's appointment in before her flight though. As usual the doctor's office is running behind. Her frantic state grabs Honey's attention as soon as Mia enters and sits down next to her. She can't help but ask and Mia explains her dilemma. Honey, seemingly being kind but actually trying to capitalize on an opportunity, offers her spot to Mia to go next in the rotation. Mia is very grateful but she hasn't gotten all the details to this kind offer. Honey tells her that she needs Mia to do something for her. "Okay, whatever you want.", famous last words LOL! Honey says that she'll let her have the spot but she wants Mia to worship her feet. Mia is taken by surprise and gives Mia pause. Mia needs this appointment really bad though so she agrees, but is concerned about people walking in. Honey says that she'll keep an eye out. Mia begins to sheepishly lick Honey's arches which are literally popping out of her shoes!! After a little bit Honey tells her to remove her shoe and Mia complies. Mia continues to worship but in a very conservative way. Honey pulls her foot away, "You don't have to do this, if you don't want the appointment…..", Mia interrupts "What? What's wrong? I'm doing it." Honey tells her that she's got to put more into it and really enjoy it. Mia, needing the appointment badly, dives in and gives Honey's sexy little wrinkly, powerfully pointy, archy feet the worshipping of a lifetime!! Mia eats her soles and sucks her toes very passionately for a nice long time. So long and so passionately that they forget the time as well as looking out for other people!!! The nurse, Ocean, comes in and catches them!! As one would imagine Ocean asks what the hell is going on. The girls, embarrassed and disheveled, explain the situation. What happens next, though, is quite unexpected. Ocean explains that if Mia needed a faster appointment she should have been worshipping HER FEET and that Honey can do nothing for her. Ocean isn't without some sense of justice though. Ocean says that Mia can go before Honey but first Honey must worship Ocean's feet and Ocean will worship Mia's feet for being taken advantage of!!! The three climb on the sofa and Ocean's devours Mia's soles while Honey dives into Ocean's unbelievably sexy, soft feet and toes!!! Who wants an appointment to go to this doctor's office?!?!?!?!?! YEAH!!! (40 Mins long!!!)