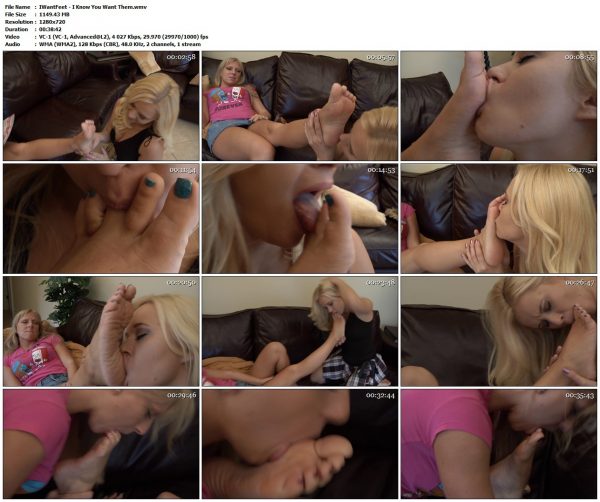 Saying this up front, this is currently personally one of my top 5 favorte videos of all time. It's SUPER hot. The passion in this video has maybe been matched in terms of pure foot worship but can't say it's been superceded it's REALLY PASSIONATE AND SEXY!!! So as a guy imagine this. What's worse? Your girl cheats on you with another dude or then gets totally turned out, turned on and totally pleasured by the feet of another girl?! And SHE'S the girl that caught your girlfriend messing around! I mean wow, right?! That's what happened. Oh Holly sitting on the sofa SOOO sexy and smug and Dre comes in with her tail totally between her legs. She knows Holly saw the whole thing and wants her to just forget about seeing Dre with that guy. Oh Holly's willing to be reasonable but she wants something in return and IT'S GOT TO BE GOOD otherwise….NO DEAL! Dre is so desperate she dives into Holly's feet unlike anything she's ever eaten before as Holly lays there loving it. Holly's banter is so sexy and it's clear now that Holly's for real as she indavertently (and that's the truth guys) stuck her fingers inside her shorts! Then Holly revealed how much she loves feet by flipping Dre over and getting some hot straddle action herself. Holly gets CRAZY foot eating! That's not quite where it all ends though. Dre's found something out. She REALLY liked it and she needs more. She flips Holly's young sexy little feet over SOAKS them and rides the hell out of them even trying to reach back and put the other one down her throat, Dre was that turned on! Freakin amazing!!!