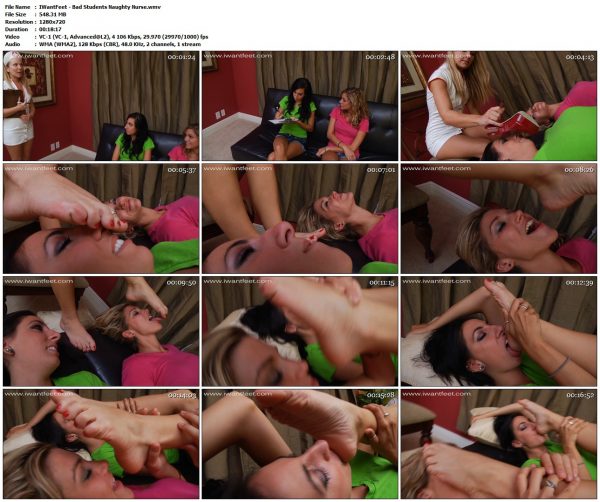 Danni and Kat have cooked up a plan to get out of their test today. You see, neither of them studied and the last thing they want to end their senior year of high school is to have to go to summer school to graduate. So, it's off to the nurses office. They decide that they're going to tell the nurse that they inhaled some chemical fumes in the bathroom and now neither of them can smell or taste anything. They really thing this was a good story and a great idea. In all reality nurse Dre finds it to be a very useful story as well, just not in the same way. Naughty nurse that Dre is her mind immediately sees how she can use these false claims to her advantage. Of course, she asks the girls if this mysterious illness doesn't have something to do with the girls having a big test today. See, Kat and Danni have a history of ending up in the nurse's office on test days. When the girls swear that it's legit, nurse Dre knows she's got them for sure!!! She tells them that this does sound very serious and seeing as how it happened on school property it needs to be followed up on properly. She explains that some tests need to administered and if they don't want to be returned to class they must consent to the tests. Of course the girls agree immediately and sign the forms. Dre also explains that once the tests start they cannot opt out lest the end up being expelled from school, a far worse fate than summer school. Everyone agrees and the tests begin. She has them both lie down on the fold out sofa with their hands at their sides. She must first make sure they can't smell. Taking her seat by their heads, Dre removes her shoe and comments how she's been wearing them all week and now that it's Friday they really smell!! She places her shoes over the girls' noses forcing them to take big whiffs. Now Dre knows the girls will have to suck it up and smell them to prove their story. The girls struggle but smell them throroughly and claim they smell nothing. Well, now it's time for Dre's bare feet to be smelled. She places her toes over top of the girls' noses making them smell her feet with deep whiffs. Over and over the girls are forced to smell her feet. They stick to their claim and say they smell nothing. Dre then decides it's time to test their taste and forces them to lick her feet. During this process Dre seems to notice that the girls aren't minding what they're doing. She asks them if they like it? Kat replies, "if we say yes do we have to go back to class?". Dre sees this as a perfect opportunity. She moves to the sofa and lets the girls go to it. The girls begin to lick and suck and nibble all over nurse Dre's feet. Dre is loving it and the girls know they're home free. Dre takes full advantage of the situation and makes the girls give her a good worshipping. She then states that if everone keeps their mouths shut then they get what they want and so does she. She tells the girls that she must release them to leave and they all agree to meet back at Dre's house. She tells them to go out the side door and she will accompany them since they're sick!!! Oh if we could only see what happens back at Dre's house!