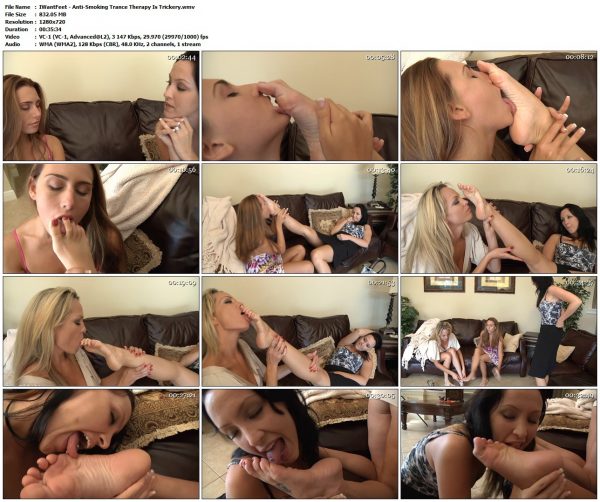 Another request comes to life!!! Like the previous released request below, this is a very long video done in Hi Def and requires a broadband connection to download. Sexy little Renna Ryann wants to quit smoking and just can't. Her roommate and friend Mia Mckinley suggests she meet with her "trance" therapist Lea for some much needed help. So Renna has Lea come over to meet. Lea explains how it will work and quickly offers to get right to it. Renna is receptive and ready. Lea pulls out a necklace and begins her work. Renna is unaware of just what the plan is but it's too late. Lea begins to explain to her that from now on she will want nothing else but Lea's feet. She will want to worship them, licking her soles and sucking her toes and nothing else will matter to her. Lea says when she "awakens" she'll feel fine and remember nothing but when someone asks if she wants a cigarette she will be overcome with the desire to worship Lea's feet. "SNAP!" Renna comes out of the trance and is amazed. "That's it?" "I'm cured?" Lea says, "Well do you feel like having a cigarette?" Renna says no but has a puzzled look on her face. She's confused but overcome by a desire to look at Lea's feet. She asks if she can hold them. Lea is coy about it and says sure. From there Renna continues to become more obsessed until she's licking Lea's soles feverishly and sucking on her toes. Lea tries to distract her, asking if there was anything else she had planned or needed to do, smiling to herself enjoying every minute. A little bit later Mia Mckinley arrives and sits down to watch. She's amazed and a little bit turned on. Mia knew what Lea had planned and set her roommate up. Mia herself has a motive which she sheepishly reveals as she asks Lea if she can make Renna do that to her feet too. Lea says "I think we can work something out". Little does Mia know that she's been "programmed" as well in the past. Lea has control over Mia already from a past session but Mia doesn't know it. "SLEEP!" Lea puts them BOTH out with a word. Now Mia is in a trance as well and is about to become Lea's personal foot worshipper too. That Lea!!! She's so tricky! Renna is told to move and Mia to take her place. Lea tells her that when she snaps her fingers Mia will awaken and she will want nothing more to worship Lea's feet! "SNAP!" Sexy Mia comes to and says immediately "I like your shoes!!" Before she knows it Mia is nose-deep in Lea's sole and devouring her with passion!!! After Lea is satisfied she again puts them both out…."SLEEP!" She was going to go but then realizes she might as well "get a little" for herself. She instructs both girls that when she snaps her fingers they will awaken feeling great. But when Lea says she's going to leave they will become frantic with desire to have their feet worshipped! "SNAP!" Lea asks how they feel. They say, great but do seem a little confused. No matter. Lea says she's leaving and when they hear that both Mia and Renna quickly start telling her that she needs to see their pedicures they got and begin frantically removing their shoes. They both kneel on the sofa displaying four soles for Lea to feast on!! Lea does so, indulging herself in the sexy pleasure of their feet. After her fill, Lea again says "SLEEP!" The girls collapse on the sofa. Lea decides maybe she'll just leave them for more fun later. She gets up, fixes her skirt, wipes her mouth, takes her purse and she's off!!!