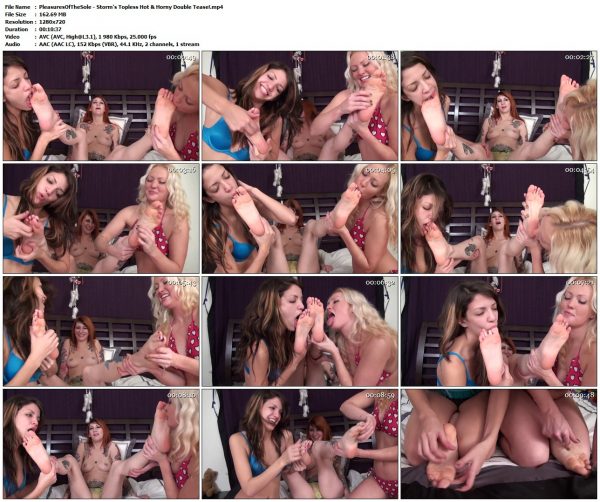 Storm's been worshipping A LOT of sexy feet, and she's not complaining, but her own sensitive tootsies are feeling pretty neglected!! She loves the feeling of a hot woman's mouth on her toes, so she asks Marissa and Stephie to help her out, and they're more than happy to oblige!! The girls gobble up Storm's sexy feet, licking and sucking her sensitive soles, toes and heels! The sight of two beautiful women worshipping her feet AT THE SAME TIME is almost too much for Storm to handle!! She's turned on almost INSTANTLY, biting her lip, moaning, and flirting with Marissa and Stephie as they go down on her feet! But the girls remember how cruel Storm was, tickling their feet just when they were really starting to enjoy themselves, AND THEY INTEND TO GIVE STORM A TASTE OF HER OWN MEDICINE!!! When Storm's good and wet, they start teasing Storm's soles with their sharp nails, causing Storm to break out into hysterical laughter! Whenever Storm's feet are worshipped, it makes them EXTRA SENSITIVE, and it doesn't take much tickling to drive the poor girl wild! She pleads with them to stop, but the girls don't care!! They're going to make sure Storm remembers this! They alternate between worshipping Storm's sexy feet and VICIOUSLY tickling them! Eventually, they flip Storm over and treat her soles to an INTENSE DOUBLE TEAM TICKLING!! And with two girl's straddling her ankles, there's nowhere for her to go!! All she can do is laugh, beg, and plead with Marissa and Stephie as they punish her sensitive feet!!