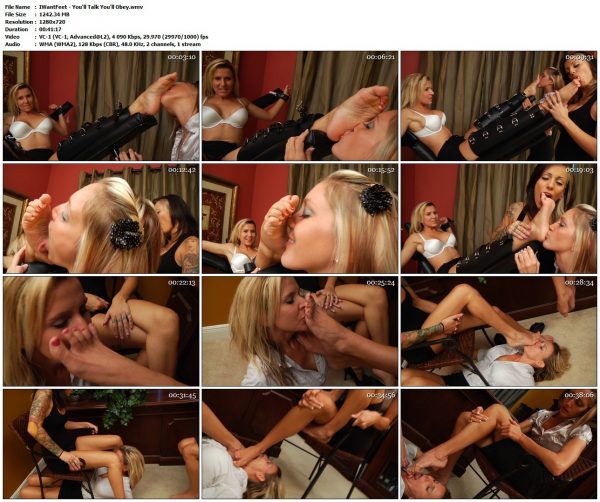 **Okay, first a word about this video! This video is an entire story but it has two different parts to it. "You'll Talk" and "You'll Obey". This is the entire video as it was intended to be. Below it has been broken up into it's two segments so you can choose. The video is cheaper in it's entire form than if the two segments are purchased separately. Now time to enjoy this really sexy, hot show!! ** Part1 Sierra has been caught. She's a spy and Tay knows it. Sierra is a freelance spy so she could be working for anyone. Tay wants to know who. Britton and Tay also have some very important information that they've gathered about this spy and how best to get under her skin. Sierra of course denies she's a spy. Tay isn't buying it. Tay inserts her tongue between Sierra's arch and her shoe. Sierra reacts a little bit but remains very coy and tells Tay she's wasting her time. Tay isn't convinced as she removes the shoe and begins licking and nibbling and sucking on Sierra's sexy wrinkly soft bare sole! Sierra is responding little by little. She can't resist the foot worship. It's her weakness and it turns her on immensely. Sierra wonders what Britton's purpose is in this whole thing. Britton is about to show her. Tay does soles, that's her specialty. Britton specializes in toes with her sexy luscious lips! Quite a combination. Britton works her way to Sierra's other foot and begins sucking her toes passionately. With one girl on each foot it's beginning to get to Sierra. She's losing it. The girls continue to worship her feet. Tay and Britton switch places and Tay does the other sole while Britton does the other toes. Then they decide to work together. Both girls worshipping one foot. Sierra is euphoric, in a state of total bliss. How would you ever get anyone to give up information with this tactic???? Why not just lay there and enjoy what you love and keep your mouth shut? Simple, stop the foot worship!! The girls stop. Sierra is so turned on she wants more. Tay tells her she can have more but she needs to talk AND she also needs to agree to be her personal employee. Sierra thinks for a minute and the girls act as if they're going to leave. She cracks! "I'll do anything, anything just please don't stop!!" Tay agrees but tells her she needs to come to her office…. Part 2 When Sierra arrives at Tay's office Britton and Tay are waiting. Sierra has become Tay's employee now and will be used at Tay and Britton's discretion. Tay wants to test her new employee's ability to obey and puts her to work immediately. Tay tells her to kneel in front of her. She forces Sierra to smell her stinky feet that have been in her shoes all day every day. Sierra's nose is engulfed in Tay's toes and the scent that lives there. One foot then the other, Sierra is forced to take large whiffs of Tay's sweaty, stinky feet. Sierra is then told to get on the floor under Britton's chair. Britton removes her heels and forces Sierra to do the same to her. Laying her toes right over her nose forcing her to take in the scent of Britton's feet. Tay watches for a little while but has the need to torment her and she goes down to Sierra's feet to tickle them while she's being forced to smell Britton's. After the girls are satisfied with that they both sit facing each other and force Sierra to be their foot stool. The put their feet all over her face and then they command her to worship their feet. Sierra has to lick, kiss, suck and nibble both girls' feet. They drag their soles over her tongue and shover their toes into her mouth. Sierra is becoming very turned on by it as she is covered by their feet and forced to worship them. The girls abruptly stop her and tell her to leave as they sit and laugh. They have a new toy and no more worries about any more spying.