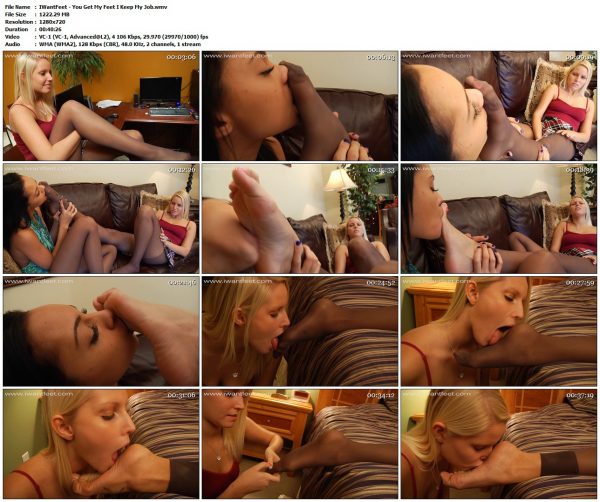 Stockinged to bare worship with two sexy girls Danica and Vanessa that leave Danica's feet glistening by the end!! Vanessa goes into her bosses office for a meeting. She's told that cutbacks are widespread and her lack of performance on the job has put her on the list of people to be let go. When Vanessa begs for another chance, Danica explains that the paperwork hasn't been processed but the decision is already been made. Vanessa can't lose her job and so she make a last ditch effort to capitalize on something she's noticed. She moves seductively around the desk and sits on the desk in front of Danica. She tells Danica that she's noticed her looking at her feet as she seductively removes her shoes and places her stockinged feet in Danica's face. Danica can't resist but doesn't want to do this in the office. The set a meeting at Vanessa's house where Danica is promised that she can have as much of Vanessa's feet as she wants. Later Danica shows up at Vanessa's house. She is invited to sit on the sofa. Before she can have her feet Vanessa make sure Danica will make good on her getting to keep her job. Danica agrees and then she begins to feast passionately on Vanessa's stockinged feet. After devouring her feet in hose she rips them open to worship Vanessa's bare feet! Vanessa is getting turned on by this whole ordeal and tells Danica she would like a shot at her feet and tells her they should go into the bedroom. On the bed Vanessa devours Danica's stockinged feet before ripping them off and licking and sucking on her wrinkly bare soles and toes leaving them wet from her saliva! Super hot scene!

Download – You Get My Feet I Keep My Job