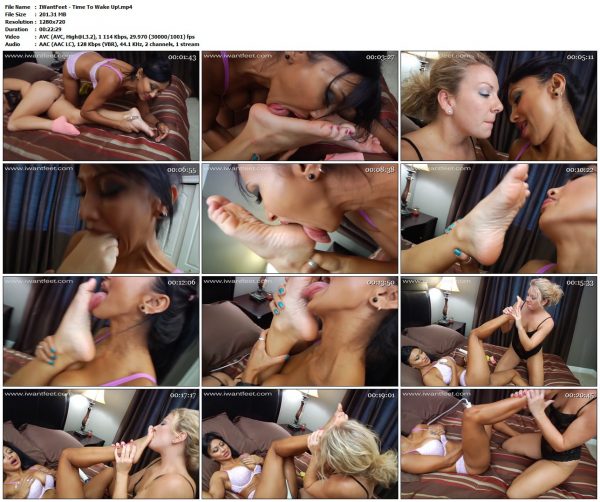 AMAZING!!! This may be the hottest, sexiest, most passionate, MOST sexually charged foot worship scene you have seen to date here at I WANT FEET!! If you love to watch two girls that REALLY LOVE FEET get after it with each other and cum really hard while doing it then you WANT to see this one! Jasmine comes in to waken Dre to go work out. They've been saying they would go to the gym in the morning and today Jasmine is going to make Dre go. Dre doesn't want to get up though, that's pretty clear. Jasmine decides that she can wake her up with a little foot attention. She moves down and removes Dre's socks giving her little kisses and licks. Dre slowly comes to life. She rolls over and Jasmine takes both feet and licks them with a little more passion. Dre leans up and the girls embrace passionately kissing. Dre says she "almost" awake but needs more. She lays back and the Jasmine REALLY starts to eat her feet! Licking, kissing and sucking on them passionately. Dre can't seem to help herself as she reaches under the pillow and pulls out the vibrator. Jasmine continues to go crazy eating her feet as Dre pleasures herself, overwhelmed by Jasmine's foot love. As Jasmine eats her feet eventually Dre can't take anymore and she explodes. The girls embrace again and then Jasmine is laid down as Dre takes her feet and returns the favor. Jasmine is in heaven almost immediately. She's moaning and loving it as Dre totally devours her feet. Dre reaches to the vibrator letting Jasmine know it's okay to pleasure herself. Jasmine does so but she's so worked up Dre has to stop her because Dre wants to keep going for a little bit. Jasmine is so worked up that when she turns it back on herself it's almost no time at all before she explodes and does so more than once to the point where she's convulsing a bit and moaning. It's a VERY hot, VERY real scene! Enjoy! Oh, and this is kind of just a lead in LOL!