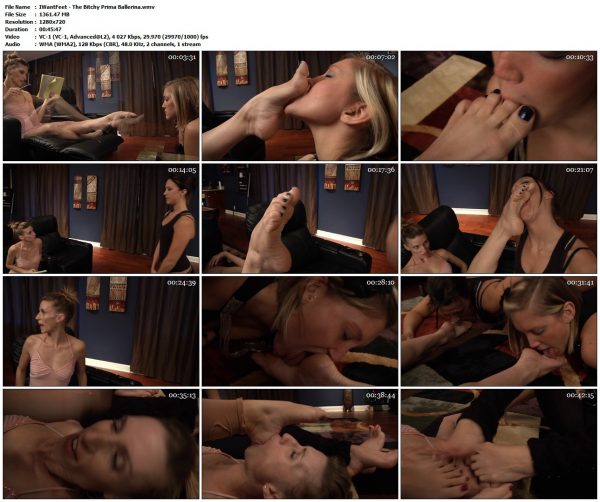 The glorious return of Honey!! This is an incredible scene! Having Honey return required a LONG, detailed and very involved scene. There is something here for nearly every foot lover no matter what you like! As you all know Honey is a real life prima ballerina with feet that are unmatched in power and beauty. Well Honey is casting for an understudy for her next show. She's definitely a little bit full of herself and knows that she's a cut above most girls. She's upset with her two finalists that she has to choose from as they're clearly not worthy but, alas, they're the best of what she had to work with. So she brings them to her private studio for a final analysis so she can decide who wins. Lea and Tay come in and stand in front of her as she tells them basically they suck but they're the best of the rest. She has them lay down and show their feet to her as she berates them and points out there shortcomings. After that she says she'll evaluate them one on one. Tay is first and Honey begins to have her fun. She asks Tay if she's willing to do anything to get the part. Tay says, yes anything. Honey tells her to get on her knees as Honey sits down and puts her feet up. She tells tay to first kiss her shoe which Tay reluctantly does. She then tells her to remove her shoe. When Tay reaches for it Honey stops her, "Don't touch it! Never touch my feet, you're not worthy." She has Tay remove it with her teeth. When Tay does she makes a face. Honey asks Tay if her foot has an odor? Tay says yes. Honey tells her that's the smell of perfection and she should get in close and get a good look at her perfect foot. Then she makes her smell it "Bury your nose in there and get a good whiff, I want to hear you smelling it!", Honey commands. Then Honey tells her to worship it. Honey says she needs to do a good job if she wants this part. Tay worships Honey's feet as Honey sits and enjoys for long time. She then sends her away and it's Lea's turn. She does through the same basic evaluation, making Lea do the same things to her other foot. She then calls them both in and says that she can't decide and they both have a chance at the same time to prove themselves. Honey lays on the floor and they devour her soles. This is interrupted by a phone call in which Honey receives the news that the show has been cancelled. She informs the girls that the part is now gone and it was a waste of Honey's time but at least the girls got to be around her feet! The girls are PISSED!!! They went through all that abuse for no reason. They attack Honey getting her on the floor. They spend a long time forcing her to smell their feet, yelling at her, making fun of her "what's the matter princess? You don't like to smell our feet?". They are REALLY MEAN to her and when she talks they shove their feet in her mouth, pinch her nose, foot-gag her and just basically abuse the hell out of her as she wimpers! They eventually make her admit that their feet are better but Honey isn't quick to give in. She does give in eventually after she's totally broken. This is an amazing scene with super hot action and we worked really hard on it for you guys so we hope that you LOVE it!