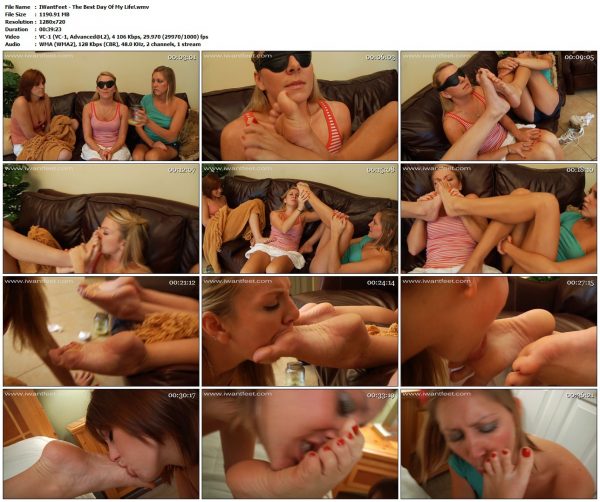 This is an AMAZING foot worship/smelling custom that should not be missed by fans of either or both!!!It's unbeliveably sexy!**** Tay and Brianna are good friends from years back. Brianna is visting Tay and so they're sitting on the sofa talking about Tay's roommate Dre. Tay is telling Brianna how Dre acts suspicious and sometimes when she walks by her room she can hear her taking deep sniffs and one day when the door was cracked open she could've sworn she saw her smelling her own socks!! Brianna is shocked. Tay goes on to say that often she finds her dirty socks missing as she always drops them on the floor in the same spot so that she can wash a bunch of them later. Tay has come up with a plan to see if her suspicions about her roommate are correct. As she begin to describe her plan to her friend Dre comes home and Tay just quickly tells her "follow my lead". Tay tells Dre that they're just sitting around trying to decide what scented candles they like best and therefore would like to buy again. She invites Dre to sit down and also give her opinion but tells her they've been doing it blindfolded. Dre agrees and sits down for her blindfolded "smelling" test. Tay begins to actually put real candles under her nose, leading her into thinking this is a real thing. After she rates a few candles Tay begins to slip off her shoe and sock, giving Brianna the "shhhhhh" sign. She puts her bare foot up to Dre's nose and asks her what she thinks. Dre's demeanor immediately changes. Her interest in smelling this particular "candle" becomes much greater. She is also visibly seeming to get aroused a bit. Brianna joins in and she the gives Dre a different "candle" to smell, her feet! This goes on and Dre is really beginning to get worked up. Unknowingly she begins to reach down and rub her crotch a bit in all the excitement. The girls substitute real candles and Dre immediately asks for the "other candles" back!! She can't decide between the two favorites. Tay offers to remove the blindfold so she can see what her two favorites are, BUSTED!!! Dre sees the two pair of feet in front of her face!! She's clearly caught. No too proud to beg though, Dre confesses and asks if she can please keep smelling. The girls agree and Dre is in heaven. Going back and forth and even making a "nose sandwich" out both girls' feet and gets really aroused and lets herself go. Deep smelling and Tay even "helps" Dre out with her foot by rubbing it on her crotch! Tay is curious if she justs like to smell feet and Dre says "No, I also love to lick and suck on wrinkly soles and toes. Can I do that?" and the girls agree. Dre has them get on their knees on the sofa and tells them to please point their toes and she goes to town. Dre is licking and sucking all four bare soles, loving every minute. Getting them even a little shiny from her sliva. The unexpected thing is Tay and Brianna are beginning to enjoy it! They want to maybe share in the fun! Tay begs Dre to worship her feet and the girls tear off for the bedroom! In the bed Brianna and Tay attack Dre's wrinkly bare soles and Dre is in heaven! The girls lick and suck and nibble her bare feet wildly while Dre enjoys her new foot "converts". They even flip her over to suck her toes and again Dre is compelled to play with herself a bit. "This is the best day of my life!!" Dre proclaims and she asks the girls to join her on the bed so she can have both feet back in her face while they continue to enjoy. The girls comment that this won't be the last time this happens!!! What a day for Dre!!!