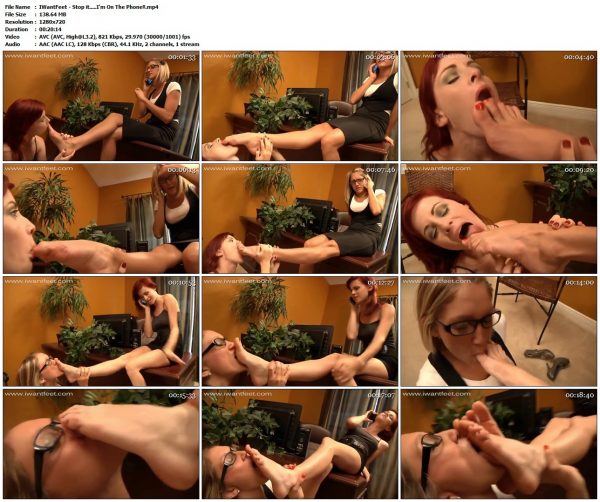 Tay calls Hollis from her office as it's the end of the day and the whole place is deserted. No one around to interrupt them from having their sercret daily meeting!!! At least that's what they thought. Just after Hollis arrives to Tay's office to engauge in some foot worship fun, the phone rings. It's the big boss man and Tay has to talk to him. Hollis doesn't want to wait though. She dives in to Tay's feet licking, sucking and nibbling away while Tay tries desperately to maintain her composure. Torn between the overwhelming sensation of Hollis' soft, moist lips and mouth and her obligation to her high paying employer, Tay tries to not let on and acting interested in her boss' comments even though she's not. Hollis is relentless even though Tay is quietly trying to get her to stop. But after a while the conversation with her boss turns to her other co-workers like Hollis. Tay sees a chance to put her through the same ordeal and tells her boss that Hollis just happened to walk in the office and forces Hollis on the phone. Hollis takes the phone and Tay goes to town!!! Tay decides to add some tickling into her passionate worship to make it as difficult as possible for Hollis to talk to the boss!!! Awesome video!!!