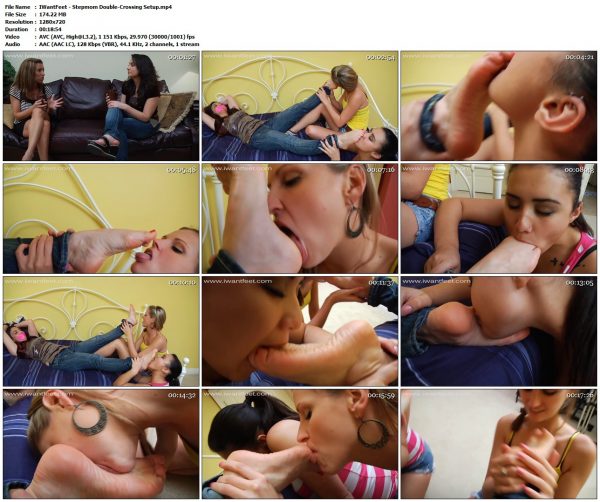 Talk about incredibly sexy, ravenous, foot-drenching worship this one is AMAZING! If you don't watch another video this one is one you want to see! Sexy MILF Nikki invites another MILF over, Jackie. They both have something in common in that they each have step-daughters. Nikki is Dacy's stepmom and Jackie is Iliana's. Nikki invites Jackie in for a talk about what she's learned about the girls and also act as a go between for them. Nikki explains that she's learned that the girls have an incredible foot fetish and have "shared" some time with them in that regard (you'll see that later). Anyway, they are also IN LOVE with Jackie's feet and wanted Nikki to see if she could talk Jackie into "playing" as well. Now Nikki already knew Jackie's answer because she knows Jackie and knew that she just wouldn't. So as a back up plan to set her up for the girls Nikki put a little something in Jackie's drink. While Jackie is explaining that she was definitely NOT down with letting the girls have their way with her feet, she begins to fade and falls asleep. Nikki calls the two girls in and tells them to have at it!!! Next thing we know Jackie is tied up on the bed in Dacy's room as Dacy and her step daughter Iliana begin to have their way! From here is really and truly is hard to do it justice with a description. These girls DEVOUR JACKIE'S FEET RAVENOUSLY AS IF THEY'RE STARVING. It is so amazing to watch them PASSIONATELY and with HUNGER completely DRENCH her feet. They try to swallow her feet, lick, suck, nibble and even tickle some as they literally go crazy. Jackie is bound and gagged and can't stop them and for that they're very happy. This is REALLY an incredibly SEXY scene you've got to see!