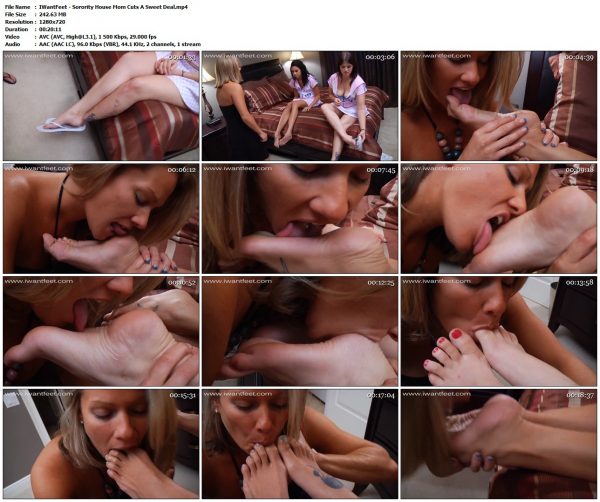 Danica and Lela want to have boys into the sorority house tonight but they know it’s against the rules. The girls decide to take a chance and take the high road by asking the “house mother” if she’ll allow it if they promise to be good. The girls agree that it’s their best shot to get what they want and stay out of trouble. They call to Sunshine, the house mother, to see if she’ll allow it. Sunshine’s initial reaction is one of total disbelief that the girls would even ask as it’s strictly forbidden. The girls promise to be good and to withhold any sex from the boys. They just want a night in with their boyfriends. As the girls desperately offer up all types of bribes to get her to agree, Sunshine realizes a golden opportunity. Imagine being a mature woman with a raging foot fetish living in a sorority house filled with beautiful girls and amazing feet. Sunshine has to supress her desires all the time but today it looks like it may be her lucky day. She asks the girls if they’ve been out walking on campus all day wearing out their feet and getting them nice and sweaty. The girls answer in the affirmative. She goes for broke. She tells the girls they can have their boys but they have to let her have her way with their feet. The girls are puzzled as to what that could even mean but if it gets them what they want then great! Sunshine has the girls roll over and line up their bare soles for her as she kneels on the floor and dives in. Sunshine gently takes Danica’s foot first and begins a long VERY SEXY, VERY SENSUAL, slow, passionate, foot DRENCHING worshipping! Sunshine is so loving and slow as she passionately devours the girls SOFT, WRINKLY BARE SOLES! She gets them nice and wet as she drags her tongue up and down their soles and tries to deep throat their feet. She even has them roll over so she can eat their toes before having them return to their stomachs and line up their soles for a four sole tongue bathing! In the end everyone gets what they want and by the sounds that the girls were making during their worshipping, Sunshine may appear to have carte blanche to do it any time she wants!!