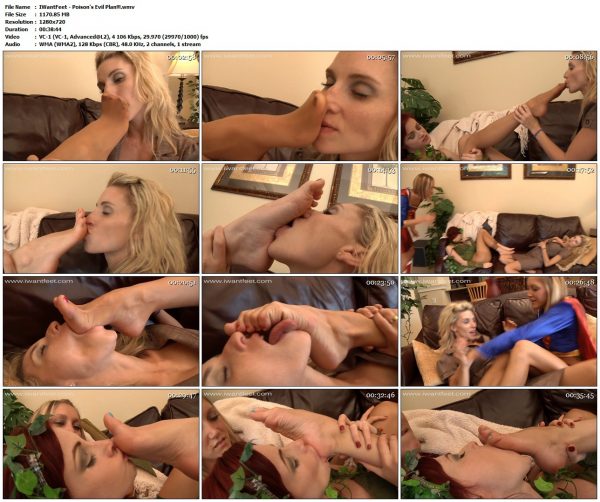 Really sexy custom video that fans of the superheroines will surely love!!! Poison Ivie has an evil plan, but then again, doesn't she always? This time she wants to "revamp her public image" and actually gain enough favor in the community to get elected to public office and the city council. But how to do this? Crackshot investigative reporter Honey Crest who writes for the daily news has been Poison's biggest critic over the last few years. She knows that Poison wants to get onto city council and so Honey wants to interview her and ask her "the hard questions" as well as confront her with some information that she has from an anonymous "source" stating that she just wants control of the city to rob it blind!!! Poison thinks, who better to get on her side. If she can get Honey Crest singing her praises and discounting any naysayers then the public will listen as Honey is known for "seeking out and finding the truth"! So Honey arrives and begins the interview. As she's pushing for answers Poison slowly begins to remove one of her boots and slowly waves her scented stockinged foot in front of Honey's face. Honey continues asking questions but is beginning to become confused. Poison is getting Honey under her spell and Honey begins to forget the questions and becomes mezmorized by the scent of Poison's feet!! Resistance is futile and Honey falls foward burying her nose in Poison's smelly toes. The plan is under way. Poison continues to exert control over Honey as she smells and smells away. But this won't be enough. She needs to get Honey to lick and suck and worship her feet to gain full control. She gets what she wants and eventually has Honey ripping off her stockings and worshipping her bare soles, sucking the powerful evil poison from Poison's feet!! Poison tests her out asking if she' going to say good things about her and get the newspaper to back Poison's candidacy. Honey agrees!!! She's totally under Poison's control. This is bad. Fortunately for Honey, Supergurl has been watching. She knew that eventually Poison would try something devious and luckily she found Honey. She knocks out Poison and takes Honey to the other sofa. Honey is deep in a trance, what can Supergurl do? Well she thinks fast and uses her own feet to combat the poison Honey has taken in. Supergurl feeds her feet to Honey. Honey is passionately licking and sucking her feet. Supergurl is even getting a little bit turned on by Honey. "Oh well, what I do to save the world", quipped Supergurl LOL!! Eventually Honey comes around and now knows what happened. She says she didn't realize there was that power in supers' feet. Supergurl tells Honey that she has the power in her feet too…..the power of the truth!! "Let's use it against Poison and get her talking", Supergurl postulates. Honey agrees and we find Supergurl pinning Poison down as she struggles to avoid Honey's bare foot closing in. When she puts it over Poison's nose it immediate takes effect. She's soon sucking and licking all over Honey's sexy feet and singing like a bird about how evil she is and all of her devious plans!!! Foiled for now. The sexy feet of Supergurl and Honey save the day!!!