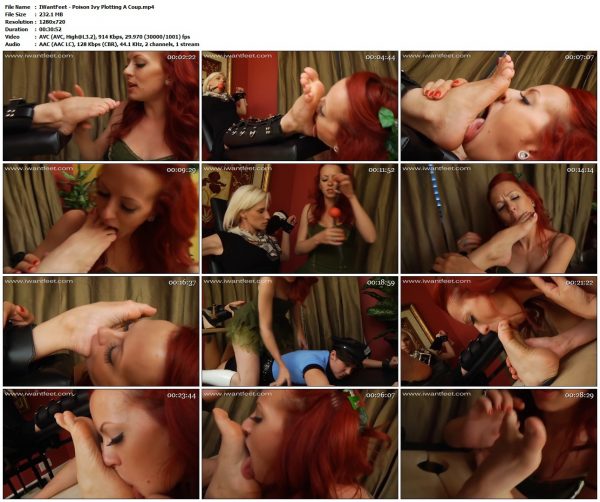 Hold onto your butts!!! This is one SUPER sexy video that kicks off a three part scene. Poison Ivy is at it again!!! She's the mayor and aims to get her under Poison's spell. You see Poison knows that she'll never get into power politically in the city. The only option she has to rob the city blind and gain access to it's wealth and control of its resources is with inside help. The Mayor, Honey, is the best way to do that. Of course, this is going to take some serious powers of persuasion and Poison knows just how to do it. We find the Mayor tied up in Poison's hide out. Poison explains to Honey what she wants and as expected Honey refuses to help her. Unforunately she's in no position to resist Poison. Poison explains that for her it's a win-win situation. Poison absolutely LOVES beautiful female feet and it just so happens that it's a great part of the body to use to infuse her mind bending powers! Mayor Honey, muffled through her gag, tells Poison that it won't work but Poison knows otherwise! She removes the sexy Mayor's shoes to bare her beautiful feet. What a wonderful little bonus, getting to have your way with such a powerful and beautiful woman's feet. Poison takes one of the Mayor's toes in her mouth and immediately she begins to break her down! Honey tries to resist but with each long lick of her sexy bare soles and deep sucking of her beautiful toes only serves to weaken the Mayor. As Poison enjoys her work the Mayor becomes weaker and begins to turn into one of her minions! Poison can tell that the Mayor is broken so she removes the gag before moving on to her other foot so she can listen to the proud Mayor as she moans under the touch of Poison's mouth on her feet! As Poison enjoys her spoils, she hears a noise so she quickly hides in case it's the authorities. It is! Sexy chief Lela enters the room and rushes to the Mayor's side. They Mayor is deleriously saying Poison Ivy, Poison Ivy due to being overwhelmed and Tipsy with her powers of worship. Lela shakes her trying to get the Mayor to come around. Lela tells her she knows it's Poison and asks where she is. Lela doesn't see the knock out blow coming from Poison as she sneaks up from behind. Another bonus!!! Lela comes to, bound face down in horizontal stocks. Her feet sticking straight up and totally vulnerable to Poison. Lela is angry and threatens Poison but Poison knows she can do nothing. As Poison removes the shoes of Lela she notices that Lela is particular threatened by it. She can tell that it's already a weak spot for the sexy cop! Lela tells her she'll never give in but as soon as Poison's lips wrap around her sexy toes Lela's resistance is all but gone! Licking and sucking on Lela's sexy, pointy, wrinkly soles and little toes brings Poison great. Beautiful feet to worship and having control of the Mayor and the Chief is about the best scenario she could ever want! Poison's coup is well under way and she's got all the power she needs for it! What'll happen next?!?!?! What effect with this spell have on the two heroines? Tune in next time!!!