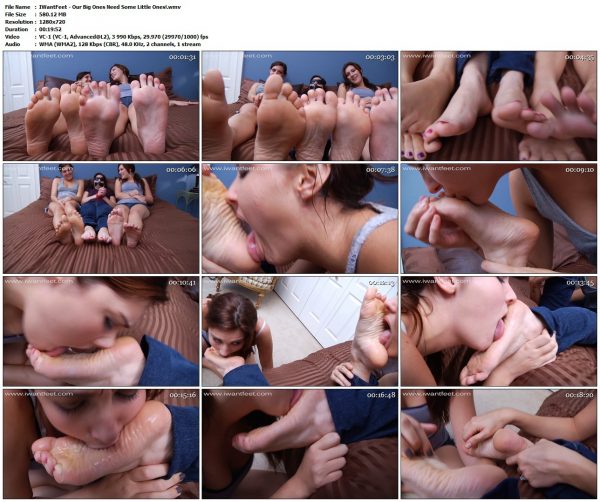 Super sexy little custom from a big fan!! Lady Bell and Sadie Holmes (formerly Cherry Poppins) are sitting around admiring each others' big beautiful feet. The love and enjoy their sexy size 10's regularly. They do, however, yearn for some tiny feet once in a while but rarely get to have some. They talk about a girl that lives in their complex who has some very sexy tiny feet that they see pretty regularly and know that she's going to be out picking up the newspaper right about now. They're feeling bold right now and think that maybe they'll go talk to her and see if they can get her to come back with them and play a little bit. We return to see the girl they were talking about. It's poor little Jackie bound, gagged and blindfolded!! Big surprise, poor Jackie yet again. Sadie says "That really didn't go as planned" and clearly it didn't but obviously the girls weren't going to take no for an answer. Jackie is struggling but the girls tell her that basically if she's good and does what they want her to they'll let her go. Jackie stops struggling and complies for the most part. The girls take a moment to just compare their size 10's with Jackie's size 5.5's! They put their feet next to hers, intertwine them, have them all point their toes, flex them back and basically compare them in every way. The girls are just so excited to have such tiny feet and they want to eat them and see how far they can get them into their mouths! The girls flip poor Jackie over and begin to devour her tiny wrinkly little feet! They get after it sucking, nibbling and licking Jackie's wrinkly soles and deepthroating her feet. They TOTALLY SOAK HER FEET SO THEY ARE DRIPPING WET!!! It's UNREAL HOW WET they make her feet as they GLISTEN from their TONGUE BATH!! The girls are insatiable. After a while when Sadie is deepthroating Jackie's foot Jackie lets out a giggle. Lady Bell comments that it sounds like she's ticklish "Let's tickle her" and the girls spend the last minute or so tickling the poor captive on her soaked soles! What an amazingly sexy scene!