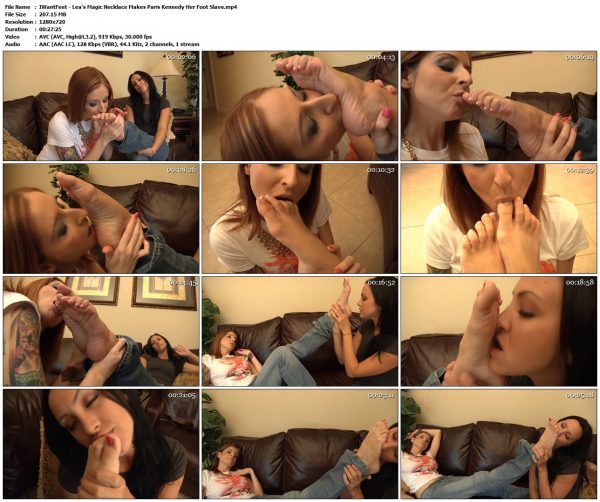 An AMAZING fantasy for you!!!! Super sexy Lea had met Paris Kennedy at the mall a while back and introduced herself and told her she wanted to tell her about a product she sells. We pick it up when Paris invites her over to the house to hear more about this amazing product. What Paris didn't realize was that Lea didn't choose her randomly. She picked her for a reason. Anyway, she comes to tell Paris about this necklace that keeps you healthy and vibrant and full of energy. Paris likes the idea of natural remedies and so her interest leads to this visit. Lea pulls out one of her necklaces and shows her. Paris asks Lea to put it on but Lea tells her no that Paris should try it on to feel it's powerful effects. Paris agrees and Lea puts it on and sits down to wait. Paris immediately feels the effects of the necklace and says how powerful of a sensation is gives her and that she feels a rush and almost dizzy. In a few seconds she lifts her head in a blank stare!!! What she's feeling is the trance she's been put in. She is now helpless and able to be programmed by her mistress Lea!!! She immediately responds to Lea calling her mistress. Everything is yes mistress, please mistress and thank you mistress. Lea tells her that she is now her foot slave and that Paris should now know that Lea's feet are the most important thing in the world to her. Paris says "yes mistress" and leans down to take in the wonderful smell of her feet and kiss the tops of her toes. Paris then gets down on the floor mindlessly worshipping Lea's feet as she's told and showing that Lea's feet are truly her whole life. She constantly thanks her mistress just for the priveledge of worshipping her feet. A long SUPER SEXY foot worshipping takes place. Then Lea tells Paris that she belongs to her body, mind and soul AND her feet. Because she did a good job and also because Lea really wants her feet too she has her come up on the sofa so she can have the favor returned!! Lea shows us just how much too as what ensues is yet more amazingly sexy passionate footworship! Then when she's had her fill she gets up and removes the necklace. Paris comes to not entirely sure what happened. Lea says she has to go. Paris still confused is overcome by a desire she doesn't understand. She wants Lea's feet and lunges for them kneeling on the floor begging and kissing them. Lea leaves her in a heap on the floor looking so desperate and sad!!! This video is long but we can tell you it is worth it! What you all have read and will see is obviously fantasy but we can tell you that the energy between these two ladies was VERY REAL and amazing. Honestly we should've had the camera on from the moment they met!! Just a little FYI for ya as we know you like the background stories too 🙂