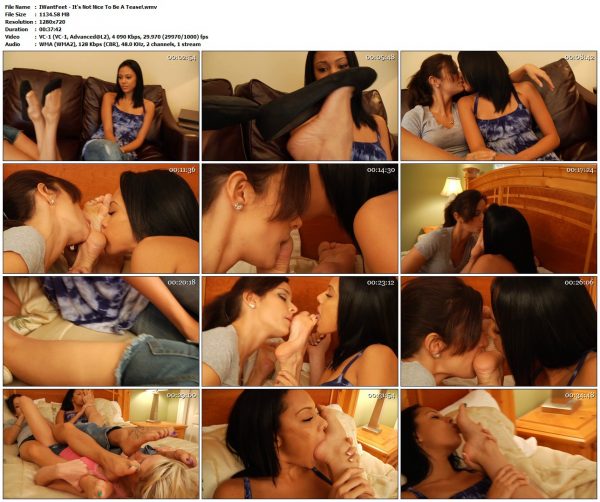 Honey & Nadia are just hanging out watching some television. Nadia is awaiting the arrival of her friend Danica. Honey mentions that she's noticed that Danica is always staring at her feet when she comes over. Nadia denies that her friend does anything of that sort and that even if she did what was the big deal anyway? Honey says that when Dancia arrives she's going to purposely move close to her and tease her with her feet to torment her. Honey is so evil. Nadia doesn't want her to and tries to grab her, but when Danica arrives sure enough Honey moves over to the other sofa, lays on her stomach bringing her feet up, essentially, right in Danica's face. She flips, dips and dangles her shoes with an evil grin, knowing Danica can help but see her feet. Nadia looks on helpless to do anything about the torment her friend is going through. After a long time of teasing Danica, Honey says she has stuff to do and heads off to her room. Nadia moves over next to Danica on the sofa. She tells Danica that if there's anything she wants to talk about Nadia's there for her. Nadia pushes the issue telling Danica she knows about her liking feet and she likes feet too. Nadia takes Danica's hand and puts it on her foot encouraging the Danica to caress it. Danica begins to lovingly rub her foot as Nadia moves to embrace her with a little kiss. Danica is comments that she's worried about her roommate and Nadia tells her that there's something she needs to know about her roommate!! Nadia leans in to whisper. What she tells her in that whisper is that she actually has a spell on Honey and can make her do pretty much anything, especially anything with feet. The girls giggle and they're off to Honey's room. The come in to lay next to Honey who is reading. After a brief, and somewhat sarcastic exchange from Honey Nadia asks Honey a strange question. "Is Honey sweet?", immediately Honey drops her reading material and stares off as if she were in a trance. "Yes, Honey is very sweet", she replies. Nadia asks another question, "Does Honey like feet?" to which Honey says, "Honey looves feet!". Nadia smiles at Danica knowing that Honey is primed to allow the girls to do whatever they wish and that's exactly what they do. Both girls share a foot and go to town worshipping Honey's wrinkly, pointy, sexy bare feet! One foot then the other the girls devour Honey's feet stopping only for a loving embrace as they can't help but kiss a little while worshipping Honey's feet. After a long worship, Nadia has another surprise. She asks Danica if she would like Honey to worship her feet? Danica is definitely interested so Nadia says "Does Honey Like Feet?" Honey replies as before, and then she asks "Does Honey want to worship feet?" to which Honey gives a very clear yes!! She rolls over and takes both girls' feet and goes to town. Nadia and Honey continue to worship Honey's feet while she devours theirs. Once satisfied Nadia has one more bomb to drop. She leans up and asks "Honey, what are you doing?", Honey comes out of her trance violently!! She has feet on her face and in her mouth. "Ewwwwwww!" Honey proclaims as she tries feverishly to wipe off her tongue with her hands. She sits up and asks what is going on? "You guys just come in here and put your feet on my face?" to which Nadia explains that she's been doing it for like 20 minutes and liking. Honey is confused and mad, she leaves the room as the girls just laugh at her! They got what they wanted and maybe Honey learned that it isn't nice to tease!!