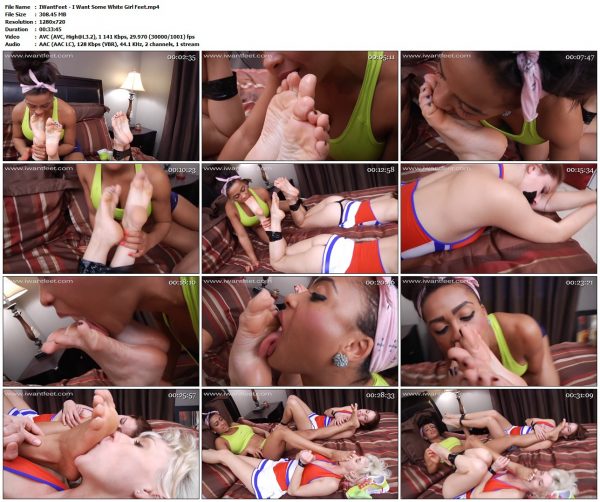 Here's a VERY sexy scene with a definite edge to it. We need to warn anyone that might be sensitive to a scene with a definite racial overtone to it that they may be offended by this scene. Basketball player Simona wants some feet! But not just any feet she wants the feet of some of the white cheerleaders that cheer at her games. She can no longer afford to be distracted during games by them cheering on the sideline thinking about their soft, wrinkly white girl feet! So using her superior physical strength and athleticism she managed to capture, overpower and bind her two favorite cheerleaders Honey and Indica! She comes in the room very much in command and anticipating the "meal" she's about to have. Bound and gagged the girls protest but that's all they can do. They're in no position to stop Simona from taking what she wants and what she wants is their spoiled little rich white girl feet! She begins by stripping off their shoes and socks taking a whiff of the scent of her prize to come. Once bare Simona dives in and begins to totally devour their toes and soles, eating them with great pleasure. Her desire and satisfaction is clear from the SOAKING she gives their feet. The girls turn from protest to pleasure groans during the process and eventually Honey removes her gag and tells Simona they want to return the favor. Simona maintains her dominance keeping the girls tied as they remove her shoes and socks and begins to eat her feet all the while Simona pointing out they're now worshipping her black feet. To torment them she intermittently tickles them as she makes the lick her soles and suck her toes. She owns these girls now and she knows and loves it!