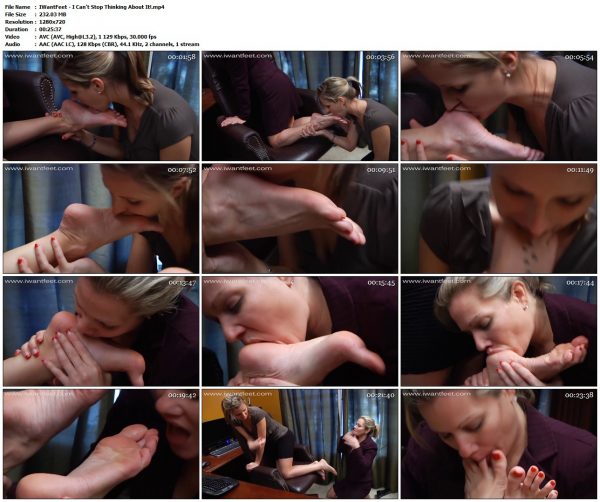 God what an amazingly HOTT scene!!! Sunshine is in her office when Dacy comes in. Sunshine is a little bit angry and frustrated with Dacy and she needs to talk about it. "What are you trying to do to me?!?!?!?!" Sunshine can't take it anymore. Dacy's dangling and shoeplay in the meetings is Sunshine. You see Dacy and Sunshine have had foot loving encounters in the workplace already and have been reprimanded about it before. Human resources has told them that fraternizing in the workplace like that would lead to termination. Dacy tells Sunshine that she wasn't thinking when she was mindlessly teasing Sunshine with her shoeplay. She goes on to tell Sunshine that her work has been suffering because she also can't stop thinking about Sunshines feet at work!! The two foot lovers have a serious dilemma! Give in to their desires and possibly be fired if caught or suffer the torment of seeing each others' sexy feet and not be able to do anything about it! Sunshine tells Dacy that after the foot show she saw she can't go home. She can't stop thinking about it and Dacy agrees that she needs her feet as well. Feverish with incredible desire Sunshine turns around on her chair as Dacy drops to the floor to tear off Sunshines shoes. Dacy dives in with clear passion as she devours Sunshine's sexy, wrinkly bare soles! Nibbling, licking, kissing and sucking all over both of Sunshine's feet is turning both girls one immensely. It's not enough though as Dacy has Sunshine flip over and put her toes in Dacy's mouth. Dacy eats her toes with desire before Sunshine can't take it anymore and wants the feet of the much younger Dacy in her mouth. Switching places, Sunshine dives in with great desire and begins to totally eat Dacy's feet! Clearly Sunshine is worked up over what she saw earlier and she can't stop herself from nibbling, licking and sucking all over Dacy's sexy, wrinkly bare soles! Sunshine also eventually has Dacy flip over in the chair as she sucks and devours all of her sexy toes! After a long heated session the girls realize that they've been lucky to not be caught and think it's best to quit pushing their luck but clearly this won't be the last time they do this at work!!