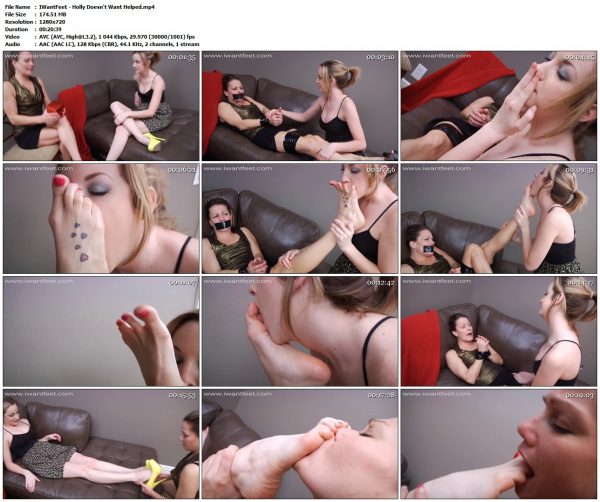 Here's an INCREDIBLY sexy, super hot custom request that you DO NOT want to miss! Dr Allura Skye is a therapist. She's having a follow up with Holly to see how the therapy is going as far as taming Holly's obsession with feet. Holly says everything is good. She tells Allura that she's very thankful and wanted to give her a gift. Allura doesn't want to take it at first but obliges due to their long struggle and work together helping Holly. It's a scarf. Holly tells her she even bought it at a special place where they can impregnate it with your favorite perfume and insists that Allura smell it. When Allura puts it up to her face, Holly grabs it and forces it over her nose and mouth. It's NOT perfume! She knocks her out and ties her up, wrists and upper thighs. When Allura comes to, Holly has her tied and gagged. She tells her that she's not been taking her medicine at all and doesn't want therapy, she likes her foot fetish. Furthermore, she likes Allura's feet in particular. Tied and gagged Dr Skye protests vehemently but she can't stop Holly from worshipping the hell out of her feet. Holly really gets after it SOAKING the Dr's soles and toes. Dr Skye tries to resist but the feeling is overwhelming and eventually her protests turn to moans of ecstasy! When Holly is finally finished totally DEVOURING Dr Skye's feet she removes the tape and tells Allura she wants her to worship her feet. Dr Skye, although she enjoyed herself clearly, states "No, this has gone too far already." Holly won't hear of it and with an evil smile she reaches for Dr Skye's trance-inducing" necklace. A powerful tool, Allura protests telling her she doesn't know what she's doing and that thing is dangerous. Holly grabs her face and forces her to watch it and even with resistance Dr Skye quickly goes under. She instructs her that when she comes to, she'll want nothing else other than Holly's feet. Snap! Allura immediately wants to eat Holly's feet and goes to town. She worships Holly's feet with immense passion as Holly loves it and makes Dr Skye her total foot slave. Holly, seeing Dr Skye's building excitement, slides her foot into Allura's crotch rubbing it and making her cum in her panties while she worships. In the end they agree that weekly sessions will likely be necessary. Holly says "For free!".