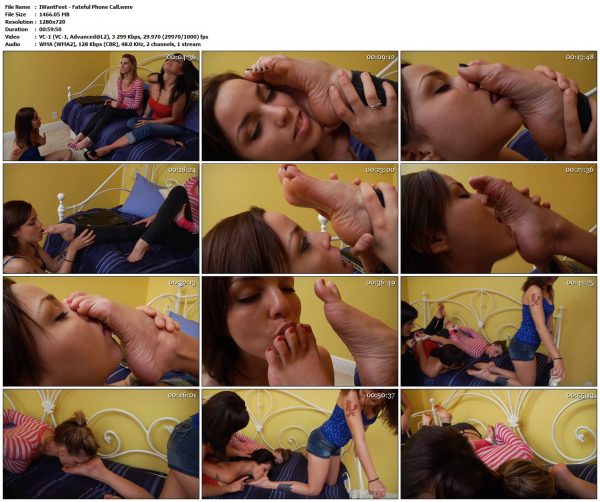 Extremely long, wonderfully sexy foot worship scene for you guys! You're going to love the very sexy newbie Paige. She's a true lover of female feet and by the end of this you'll have no doubts! The fateful phone call comes in to Paige as she's sitting with her laptop. She starts typing as she's told to do over the phone. What she finds is a little slice of heaven and an opportunity she never thought she'd have. Paige has two very sexy roommates, who's feet she adores. She's kept quiet about her fetish, her desire, for a long time. Today she sees that her roommies have been on foot worship websites and sees the chance to open the door to her closet and "come out". The girls are due home any moment and she's not going to waste any time. When Honey and Lola come in they sit down and Paige confronts them. The girls are "busted" and have a giggle about it. What they didn't expect was what Paige would say next. She tells them about her fetish and begs them to allow her to worship their feet. The girls whisper a bit and then tell her she needs to get down on the floor. They tell her that they don't do this stuff for free and that she'll have to repay them in some way. Numerous chores and duties are laid out for barter and her her desperation Paige agrees to anything they say, "I'll do anything!". When she's given the okay you can see it in her eyes, the joy. Paige is going to savor it. She's not fast and crazy, no not Paige. She takes Honey's shoe off and puts her pointed toe and wrinkled sole on her face. First, Pagie just wants to feel the wrinkles and unique texture of the skin on a girl's bare sole on her face. She gawks, holding them up and looking at them admiring. Paige soaks it in as her mouth opens and her tongue begins to touch Honey's foot. She savors every lick, slowly and with passion she pauses feeling every sensation. It's beautiful. With each foot she carefully and passionately devours, licking every wrinkle, pulling the feet into her mouth. Sucking on the toes slowly and with care. Honey's feet are first then Lola's feet get their due. If you love feet and can imagine waiting and waiting for a chance to get your hands on some particular feet that you've wanted then you'll see it in Paige. After a very long worshipping Paige has hopes that she'll have a chance to have these two goddesses give back some of the love she gave. That bubble is quickly burst and you can see the disappointment in her face. The girls imply she's "not up to par" with them and as if that would be beneath them. Paige's heart is broken. We return, however, to find Paige's friend Dixie with her and her roommates bound on the bed. Dixie doesn't think what they did was very nice and Paige is going to get her way if Dixie can help it. Dixie demands they worship Paige's feet and they're going to do it! Paige is so excited and begins to become a little bit dominant. Honey is forced first and told she better do it right! Dixie forces her face onto Paige's sole giving her no other choice. Honey must kiss and lick and bite and anything else to satisfy the heartbroken Paige. Paige is SUPER SEXY here as you can see that her love of being worshipped is the same as her love of worshipping. Paige is clearly turned on and loves to look back and watch as the girls are forced to give her what she wants. Lola gets the same treatment and eventually both girls are licking and sucking on her feet as Paige is euphoric with plesaure. Dixie has an evil streak and decides the girls should have to undergo some torture too as she goes back to tickle torture their feet while they worship. Paige demands that they must focus on her feet regardless of whether or not the tickle torture is distracting them, enjoying a little power position for once. In the end Dixie and Paige leave them to think about their actions and are forced to tell Paige they love her before Dixie and Paige leave. A brief conversation as the scene closes shows that the two girls haven't learned much from their ordeal. But hey, Paige is a happy girl. Wouldn't you be? ***** NOTE***** Per many people's requests we've made this available in the full version and two parts. The full version is availabe at a savings over buy the two parts separate. Hope this makes everyone happy.