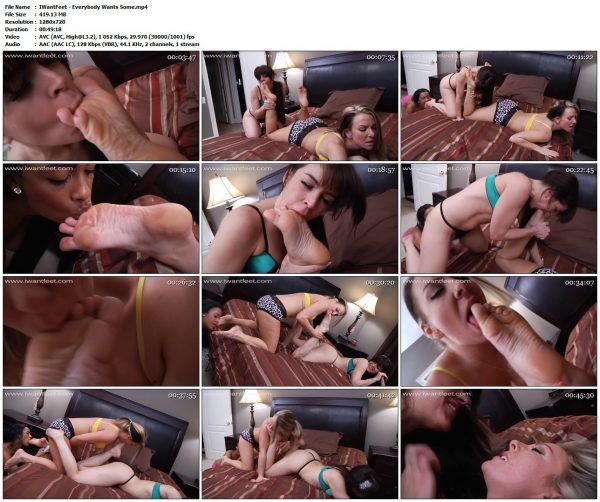 Super HOTT video!!!! It may be the most genuine video we've shot in terms of the models really truly having a relationship with each other and a desire to do what you're watching them do together. A custom reqest for a great fan. Dre is just hanging out reading when Annabelle comes in the room. She begins to eventually eat Dre's feet while Dre tries to read. Passionately Annabelle totally devours Dre's sexy, wrinkly bare soles, arches and toes! While this is all going on you can see in the backgroung Simona peeking into the room. She's obviously turned on by what she's watching and decides she wants some of this action! She crawls across the floor unnoticed but it isn't long before Annnabelle knows Simona is there when Simona latches onto Annabelle's foot with her mouth. Simona completely devours and DRENCHES Annabelle's wrinkly soles and toes. Dre picks on the Annabelle's sounds and realizes finally looking over her shoulder that Simona is eating Annabelle's feet! The little "train" continues and Simona decides to up the ante a bit by pulling out the vibrator and letting Annabelle have it! Annabelle is eating Dre's feet hard and cuming just as hard in no time! Simona gives her good worship and many orgasms before she begins to call for Dre's bare soles. Switch positions but the same game as Simona eats and vibes Dre while Dre devours Annabelle's bare feet! In the end Annabelle and Dre are on top of each other making out while Simona slides the vibrator between them and on BOTH PUSSIES! It's sooooooo DAMN HOTT!!! Everybody wants some and everybody GETS some!