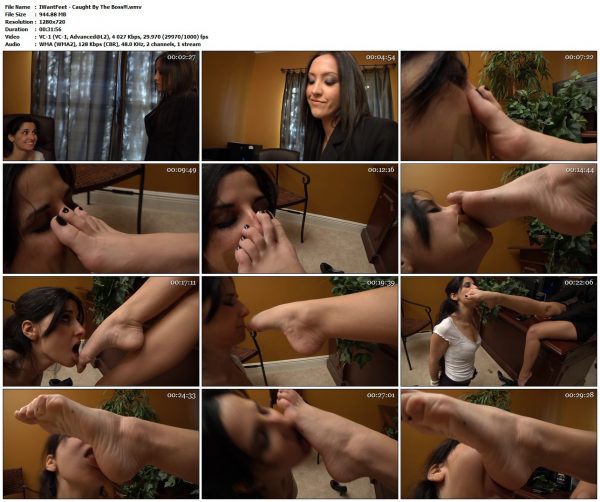 Here's a long SUPER HOT custom from a wonderful fan who deserves a thanks from everyone that enjoys this type of scenario!!Jazmin thinks her boss is saying bad things about her to the "brass". She sneaks in after Lea has gone home for the evening to get on her computer and check her email for evidence. Well, it would seem Jazmin should've maybe waited more than a few minutes after Lea left or at least watched her car drive off because guess who shows up in the office to get something she forgot? Yep, you guess it Lea! Lea asks what Jazmin is doing, Jazmin is clearly scared and begins to fumble around saying she was….uh…..looking for staples. Lea leans over and takes the keyboard. Lea is a smart, powerful and beautiful woman. She's not fooled and with a few keystrokes and determine that Jazmin was snooping in her email. Lea threatens Jazmin with her job. Jazmin says she'll do anything. Lea has an idea for some punishment for her and if Jazmin complies maybe she can keep her job. We return to find Jazmin kneeling with her hands bound behind her back and Lea putting some tape over her mouth as they can't be making too much noise. Lea sits on the desk, crosses her leg and begins to dangle her shoe. "Let's put our face in there and get a good whiff of my feet inside my shoes." Lea intends to make Jazmin smell her "sweet scent" at the end of every day. With her mouth taped shut and her job on the line Jazmin must sniff up all the smell of Lea's sexy feet! After smelling in the shoe Lea then takes her feet and rubs them all over Jazmin's nose and face. She tells her that she had better hear her deeply smelling her bare foot scent. "Is this turning you on?" Lea inquires. "Do you like my sweet scent?" Lea persists. This of course is rhetorical as Jazmin can't speak. Lea encapsulates Jazmin's nose with her toes pinching it shut and making it impossible for Jazmin to breath. Lea controls her breathing letting her go to take big whiffs of Lea's feet when she inhales. One foot then on to the other Lea makes her do it all over again. Then Lea removes the tape with her toes and tells Jazmine that she will "get a taste of what she's been smelling!" Lea is clearly enjoying her position of power as she is a powerful woman who's worked her way up the foot chain at a fairly young age. Jazmin is forced to worship her feet, one then the other until Lea decides that she's satisfied. Then Lea takes on foot, pinching her nose shut and forces Jazmin to take the other foot in her mouth. There's just not enough air going in and Jazmin on the floor. Lea gets off the desk and slides her sexy feet into her shoes as her long beautiful legs extend down from her skirt and walks out leaving Jazmin in her foot scent induced slumber!