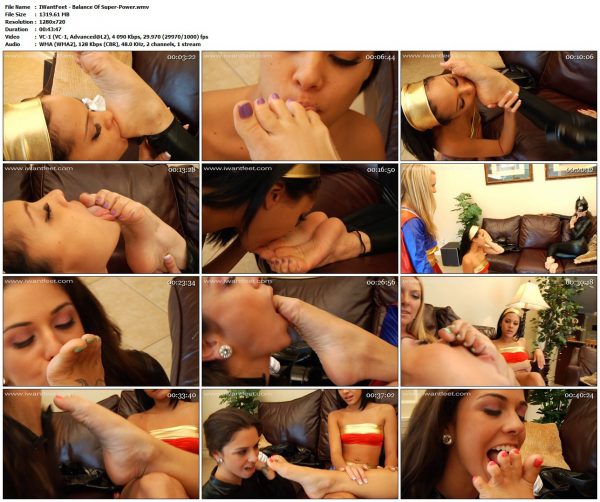 Incredible!! Wunder Woman arrives home to find a VERY big surprise. Katwoman in her house!! This can't be. If she knows where Wunder Woman lives then what else could she also know?!?!?!?!?!?! "What are you doing here?" Wunder Woman asks Katwoman. Katwoman explains that she knows a lot of things that Wunder Woman probably doesn't want her to know……like……HER REAL IDENTITY!!!! Wunder woman thinks she could be bluffing until Katwoman calls her "Diana". Wunder Woman is shocked to hear her real name spoken by the evil Kat and she knows that she's in real trouble. Katwoman is clearly in the drivers seat now and Wunder Woman knows it. Katwoman offers to make a deal with her to keep her identity as long as Wunder Woman does exactly as she's told. Wunder Woman desperate to at least buy herself some time agrees to the deal even though she knows it's probably a deeper evil plot. Katwoman instructs her to get on her knees and then makes her lick up her shiny black boots! Wunder Woman does as she's told. Then off with the boots and Katwoman tells Wunder Woman to keep her identity safe she must worship her feet!! And, she has to make it good!! She has to enjoy it and Katwoman has to approve of her job. Wunder Woman, humiliated but desperate to keep her identity safe does as she's told! What she doesn't know is that deep in the wrinkles of Katwoman's sexy "paws" is a mind controlling power. The more Wunder Woman passionately licks and sucks on Katwoman's bare soles and toes, the more she's losing control of her own mind and becoming Katwoman's pawn. Katwoman wants nothing more than to control Wunder Woman, make her Katwoman's side-kick and turn her evil thus ruining her reputation and make her a villian. Katwoman deals the final blow by getting up on the sofa on her knees and making Wunder Woman bury her face in both Katwoman's bare soles, lapping up the mind controlling sweat! She begins to ask Wunder Woman if she's going to obey, going to do her bidding and Wunder Woman is agreeing! Katwoman has her in her clutches!! Luckily for Wunder Woman, Supergurl isn't far behind! Supergurl comes in and pulls Wunder Woman from Kat's feet. "Stop Wunder Woman stop!" The bond was broken just in time and Wunder Woman comes out of her Tipsyen state. Wunder Woman explains that Katwoman knows her identity. Supergurl has a solution for that one and with her strength and speed she pulls off Katwoman's mask! Now the playing field is even. Katwoman's revealed. But before she can go she has to return the favor of worship. Not just Wunder Woman's feet but Supergurl's feet too!!! Humbled, scared and ready to submit to anything Katwoman puts her tail between her legs and eagerly worships the bare soles of both ladies. Then when she's done both sides agree to keep the others' secrets. And the balance of Super-power is restored!