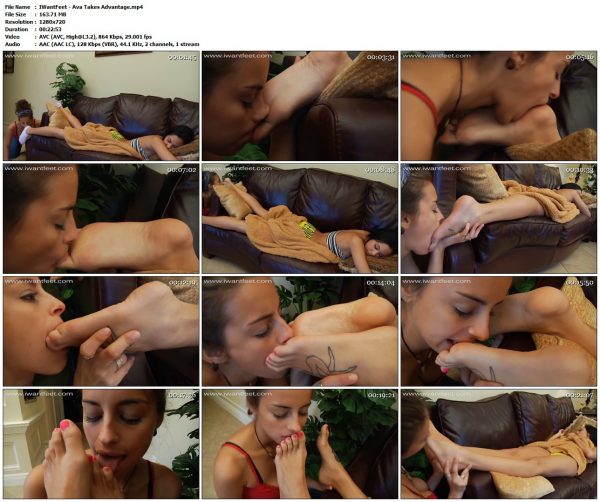 It's the weekend and Danica is starting early. She's had a tough week and it's time for a glass of wine. Ava comes home to find her on the sofa relaxing. Ava inquires as to what she's doing and Danica tells her just that. She's very loose and happy as she explains about her tough week and that she's having wine. Ava asks how much she's had with a giggle and Danica thinks for a second and says, well, this is basically the end of the entire bottle. Ava says okay laughing a bit and walks away. With her back to Danica she quietly looks to the sky with a big "thank you!!!" look knowing that Danica will be totally in about an hour. Ava has new plans for her night tonight!!! We come back to find Ava returning quitely. As she suspected Danica is asleep on the sofa. Ava comes over to test her out with a shake and a call of her name. Danica is out! Ava moves to her sock covered feet. She's still a little bit tentative as she moves in. Ava takes a few whiffs starting slowly as she smells and rubs her face on her socked feet. At that point Ava removes her socks and gets more comfortable. She dives in first getting in a bit more good whiffs before taking off licking, sucking and nibbling Danica's feet. Ava knows at this point that Danica isn't going to wake up. She knows her roommate well and knows she's had enough to drink that she's going stay asleep. What she didn't see coming is that Ava's passionate foot worship would start to stir up a few quite moans and sounds from her roommate. A few times during Ava's fun Danica would let out a pleasurable moan and even curl her toes. One tentative moment came when Danica decided to roll over but she never woke. Ava ducked down but popped back up to then focus on sucking Danica's toes. Sometimes taking all her toes in her mouth Ava had the time of her life. Eventually it had to come to an end and so Ava, as best she could, Ava put Danica's sock back on and snuck away leaving her roommate with some wet soles and toes as she slept off her wine!