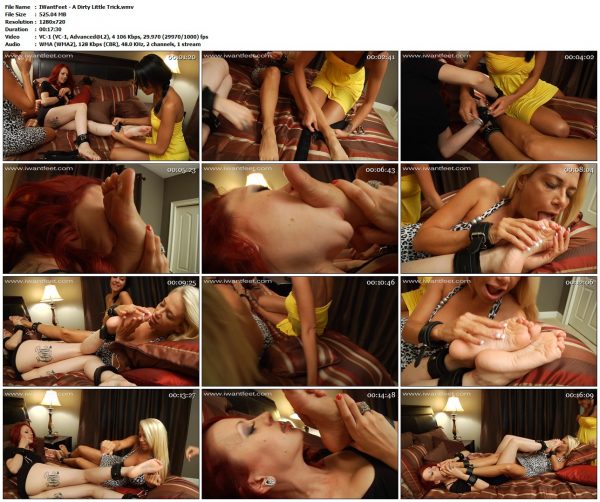 Danica is up to something. She's got a dirty trick up her sleeve but her friends Crash and Nikki Masters don't see it coming. She invites the girls over to her house and when they enter the bedroom Danica has some wrist and ankle restraints waiting on the bed. The girls are suspect immediately about what's going on. Danica explains that she just wants them to help her try out her new stuff. She gets the girls in the bindings and locks them together wrist to ankle. The girls tug at each other and agree that it works. They're both like "duh!!!" and ask immediately to be let out of the cuffs. Danica explains to them that she's not going to do that and instead wants the girls to give in to their foot fetishes with each other. Danica knows both girls have a foot fetish but they don't know about each other. Danica wants to change that and she wanted to do it in such a way that they couldn't come up with an excuse. With the girls locked together and Danica unwilling to let them go if they don't comply the girls have no recourse other than to give in to their foot desires and worship each others' feet. Watch their tongues and soft lips glide on each others' soles and envelope each others' toes. Danica watches on in delight and she even reaches in to add her favorite thing to do with feet……tickling! After a while Danica realizes that they're not going to go anywhere if she lets them loose and so she does. Nikki and Crash just continue on with their foot worshipping session voluntarily and everyone is happy!