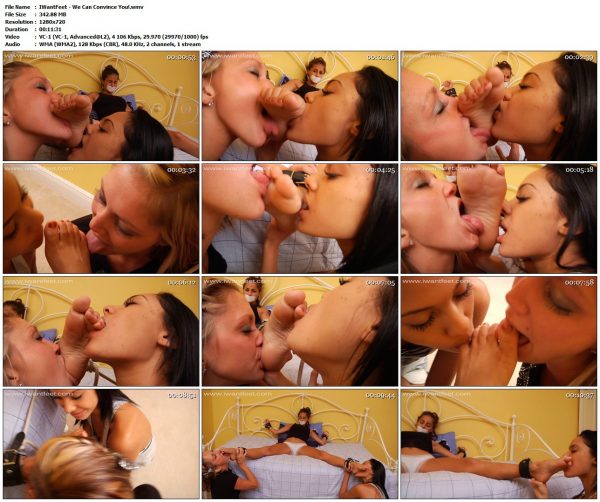 Poor little Ava is bound to the bed and gagged. Tay is just finishing up her capture when Danica enters the room to inquire just what the heck is going on. Tay is upset and believes that Ava isn't being reasonable about playing foot worship fun with her and Danica. She decided that the girls just have to force her to give in. Ava is clearly resistant but she is tied up and both Danica and Tay corner one foot and begin to go to town. Mmmmmphing through her gag, Ava continues to protest as the girls lick and suck and nibble her tiny, sexy, wrinkly little foot. The girls don't forget about the toes either as they share the toes of Ava's foot. The girls eventually move over to tackle Ava's other foot with the same sexy, passionate worship. Sucking, nibbling and kissing Ava's foot as Ava continues to protest the girls again move to the toes to share. Ava is still trying to resist so the girls up the ante by splitting off and each taking a foot. The girls each take a foot and dive in, passionately worshipping as Ava begins to give in to what Tay knew all along. Tay knew that Ava really did like to have her feet worshipped but just didn't want to give into her "inner-freak". The foot worship assault from Tay and Danica was just too much and the "mmmmphing" protests under her gag turn to moans of pleasure as she begins to writhe in ecstasy. Ava can't resist as she twists and pulls against her bonds as she's overwhelmed with pleasurable sensations. In the end she's moaning and arching her back as she's now loving every lick, kiss and nibble!